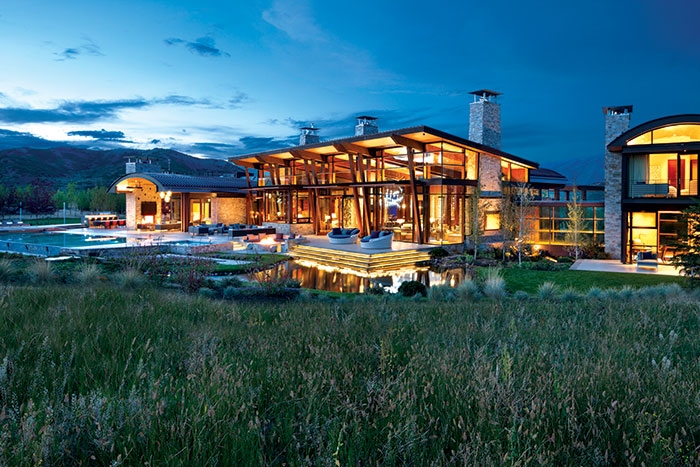 2017 Home of the Year: An Aspen Grand Legacy

It started with a simple but universal desire to build a family home that could be passed down through the generations. A place of laughter in good times, a refuge during trying times—but always filled with love. A close collaboration between the homeowners and their design team resulted in a LEED Silver-certified home of extraordinary character. The Los Angeles-based homeowners began vacationing in Aspen about 14 years ago so their two young children could learn to ski. “The kids fell in love with skiing and quickly became better skiers than my husband and I,” the homeowner says.

Then they visited in summer and were charmed by the small-town feel, the area’s extraordinary natural beauty and unique cultural offerings. “Where else in the world can you go white-water rafting during the day and, in the evening, see an opera at the Wheeler Opera House?” asks the homeowner.

So they decided to build “a place where we could bring our parents and friends…a place the kids would enjoy now and bring their own families in the future.”

The next step was to decide on an architect. The homeowners chose Charles Cunniffe Architects because they wanted a local architect renowned for great design, one who understood Aspen’s culture and, perhaps most important, someone who had extensive experience with building for Aspen’s temperature and climate—sunny, warm summers and cold, snowy winters.

“The homeowners were very clear that they wanted a well-built legacy home that would stay in their family for many generations,” says Charles Cunniffe, principal at Aspen–based Charles Cunniffe Architects. “Further, they didn’t want their heirs to have to focus on maintenance and operating costs in order to continue living in the family home.”

The 15,000-square-foot, six bedroom, seven-bath (plus two powder rooms) home took nearly two and a half years to plan and more than two and a half years to build. It was designed to look and feel contemporary and luxurious but built to be as low maintenance as possible, especially in terms of energy consumption. Using geothermal heating, hot-water solar panels on the roof and a large photovoltaic solar field (hidden in a nearby depression), the practically off-the-grid home is capable of running itself without outside resources.

Situated on a historic 10-acre ranch, the home was designed as a wing-shaped structure to accommodate the owners’ love ofentertaining. The center structure acts as a gathering space, where the homeowners host parties for up to 100 people, while the two wings provide private living quarters—one for the family and one for guests, who often stay for weeks at a time. The elongated shape of the home allows uninterrupted mountain views and for sunlight to come in from all directions. “The home has a wonderful sense of magic throughout the day’s ever-changing light,” Cunniffe says.

As much as the homeowners love to entertain, they’re appreciative of the quiet evenings spent chatting and taking in the mountaintop views. “I have a favorite chair in the corner of the living room,” the homeowner says. “I love it because I can see the mountains of Snowmass and Aspen to the right of me and fields and meadows to my left. It brings a comfort and contentment to the end of the day.”