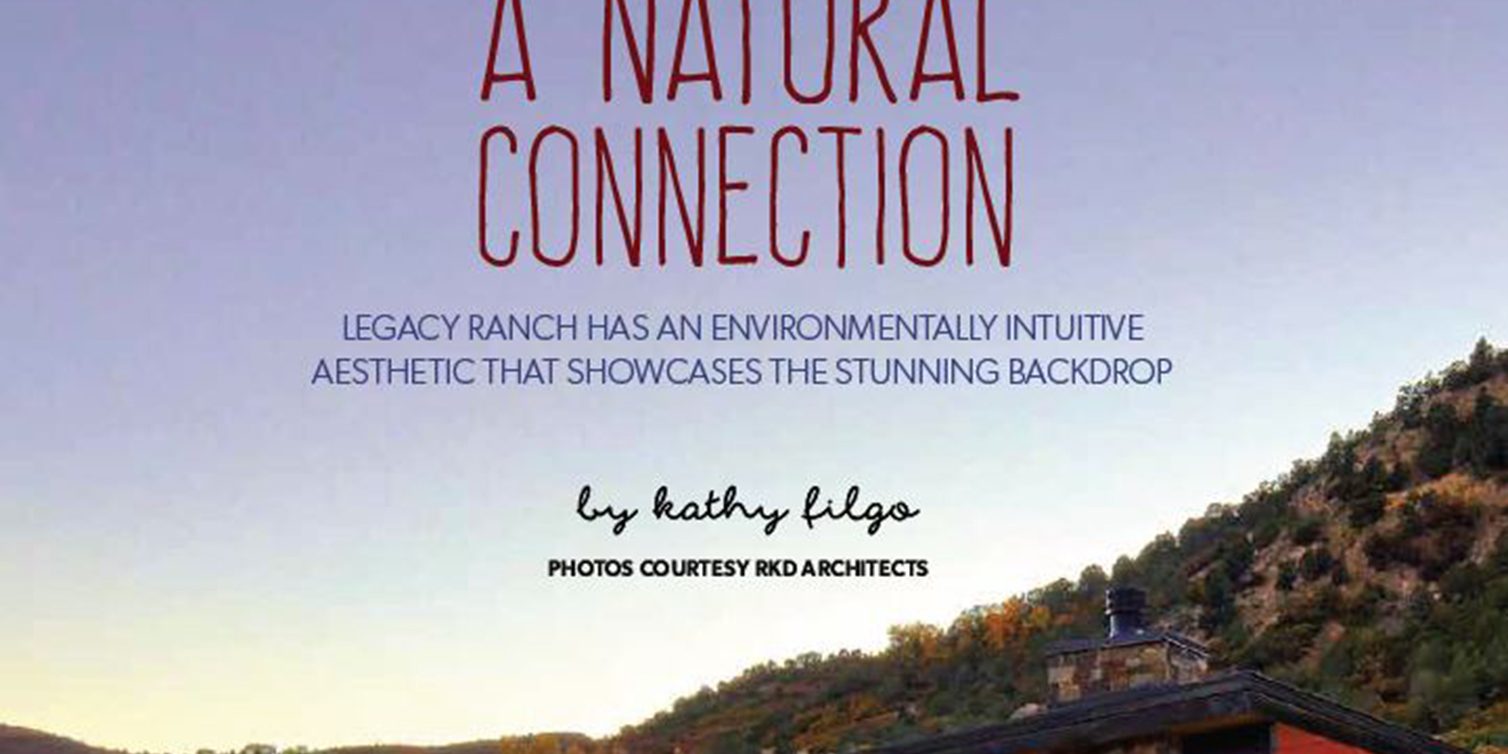 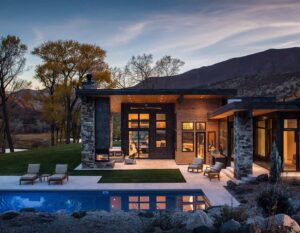 Native Americans had been stewards of the land in what is now the United States of America for about 15,000 years before the American pioneers hit the westward trail in the 1700s. But it wasn’t until after the War of 1812 that a vast migration to a new life in the western territories really took hold.

One could not ask for a more compelling environment in which to commune with nature and bring peace to the mind and heart.

There were a lot of reasons the pioneers braved the challenges of the journey to seek their destinies in the Wild West: They were pursuing gold and silver; escaping overcrowding, rules and discrimination; looking for employment and business opportunities; craving space to plant crops and raise livestock; and some were simply looking for adventure in the untamed wilds. But regardless of the myriad of motives, no matter the individual intent — ultimately it was all about the land.

The magnificent, mesmerizing splendor of the Rocky Mountains continues today to captivate the imagination and draw people to the West — to this incredible enchanting
land of towering mountains, lush landscape, roaming wildlife and rivers running through it. Who could resist?

That same endless beauty on full display on 530 acres of paradise just west of Glenwood Springs, Colorado, was something Stuart and Valarie Ross, who had the house built, couldn’t resist — it was the lure of this land that captured their imagination.

Situated on land that had previously been an expansive, working ranch, the couple named their new property Inyanga Ranch after a national park in Stuart’s native Zimbabwe. In Africa, an Inyanga is a shaman who works with medicines made from plants and animals to heal, and it’s not difficult to see how the richness of the landscape and wildlife exudes a powerful spiritual connection and brings a healing solace to the soul. One could not ask for a more compelling environment in which to commune with nature and bring peace to the mind and heart. In keeping with the spirit of the land, the current owners changed the name back to its original Rock ‘N Pines Ranch.

This pristine land is bordered on three sides by BLM and National Forest Land with towering sandstone peaks resplendent with aspen, sage and pine, and over two miles of the Canyon Creek running through it. There are also nine spring-fed ponds dotting the landscape to add to the abundance of water on this ranch.

“We weren’t even actively looking to buy a ranch,” says
Paul Foster, the current owner. “Yet, when we saw this property, we were determined to buy it.
With its spectacular vistas, it’s
like a painting.”

This was the palette given to Jack Snow, co-founder of RKD Architects and award-winning architect, upon which to perform his rare design magic.

Snow was chosen to design the home because of his special sense of how to bring exceptional, organic design to any environment, and blend, not clash, with that backdrop.

Snow was so thrilled with the canvas upon which he would work that he commented on how he was happily taking a second seat to Mother Nature. With the full blessing of the owners, Snow began to work on creating that synergy.

“We began with what was to be the guest house — about 2,200 square feet, two bedrooms, an office, three bathrooms, open floor plan — the owners would then live here until the main house, which was to follow, was complete. They wanted a simple, straightforward house with the emphasis on bringing the sweeping views into the home, and for the home to blend into these special surroundings. One of the requirements was ‘glass, glass, glass’ so they could take full advantage of every view,” says Snow. “The huge roofs rise up to the views in an effort to welcome even the very tops of the canyon walls inside. The butterfly roof was not only designed to take in the spectacular views with their height, but also offer large overhangs that shelter the patios and keep the interiors cool and protected from the intense sun.”

The exterior elements used were beautiful but not extravagant — cedar, stone from Colorado, granite and patinaed steel panels. The emphasis was always on the environment, not the materials, and ultimately the finished home looks as though it had simply sprouted and grown there naturally. 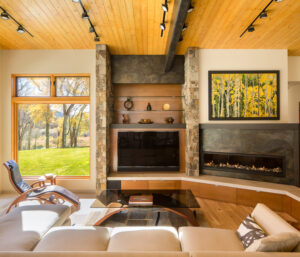 “We worked with Structural Associates who were the general contractors, and who did an incredible job of making our vision come to fruition — it always takes a team and they were great team members,” Snow continues.

The interior palette was equally unpretentious — not a single piece of imported Italian marble, Brazilian walnut flooring, or a $1.6 million Fiore de Cristallo kitchen. “The desire was to complement not compete with the surrounding environment, so all the bells and whistles found in many upscale homes simply wouldn’t look natural in this rural, remote location; the design needed to be more constrained, more muted. Every decision was thoughtfully considered with attention brought to each detail. The precise stonework around the door, the storage space cabinets under the fireplace hearth with both the hearth and the cabinetry extending seamlessly into bench seating, the patinaed steel fireplace panels are carried over to coordinating kitchen and entry wall bringing a coherency to the open space — all carefully designed and meticulously crafted,” explains Snow.

“His use of unusual materials and his choice of colors combine to create a beautiful, contemporary home with a cozy and warm feel.”

Even much of the furniture in the home was designed by Snow and looks as if the pieces just sprouted up through the hardwood floors from the earth.

Simple gray stone tile grounds the area around three sides of the home, as well as providing an organic deck for the outdoor pool. The manicured part of the surrounding lawn is integrated into the pool area supplying a pop of color, texture and connection.

Under the extended eaves of the house there are numerous spots to lounge — a private spot to curl up with a book, gather around the outdoor fireplace and create memories over coffee or cocktails, simply sit outside and enjoy the view while the sounds of the rushing creek fill the air.

The water plays an important role on this ranch with many water rights derived from Canyon Creek, and the previous owners were true stewards of the land. They cleaned up the riverbeds, cleaned and upgraded the roads  and irrigation system that includes all-new head gates, underground pipes and a large pumping station. This helps service the ponds as well as providing water to the grass hay crops grown on 75 of the 530 acres. Additionally, selected pasture grasses were replanted on the entire ranch to eliminate undesirable species from the property and, with persistent oversight, is quickly becoming weed-free.

The owners decided that the smaller home lived large, and that they were content to be living right there, says Snow. And so, the guest house became the main house.

Guest quarters were then transferred to the two on-site historical cabins; the history of one of the cabins dating back to 1929, almost a century ago. Previously used as hunting lodges, these creekside cabins have been completely remodeled under Snow’s watchful eye (he insists all he did was point and suggest) and are a short ATV ride from the hosts home, thus providing restful retreat and privacy for all.

“We have no plans to change the main home because, as it is, it’s near perfect,” reveals Foster. “We have extensively modernized and improved the two cabins on the north end of the ranch. And we are planning to construct a beautiful entrance at the south end. Beyond that, we don’t envision any significant changes.

“Mr. Snow did an amazing job of creating a modern home while making it fit perfectly with the ranch,” he continues. “His use of unusual materials and his choice of colors combine to create a beautiful, contemporary home with a cozy and warm feel.”

In fact, Snow, with his architectural integration with nature, was the perfect architect for the home. His design drew inspiration for exactly what the original pioneers understood — it’s all about the land.